A New Blog Post To Inspire Others By Bilal Alaji

It’s so cliché to think that men never experience times of sorrow, pain, or vulnerability. We walk around with composure and security written on our faces while inside we are torn to pieces. Men have conflicts going on inside them that they conceal from the world. I too was one of these men who thought that I must be strong and handle my issues alone.

Boy was I wrong or should I say I was wrongly taught. Society is part to blame for the imagery that molds and shapes the ideals that a boy carries into manhood. We are taught that men are infallible. This is shown to us through our hero’s such as Superman, Iron Man, The Hulk, The Terminator, and the list goes on. Be macho like Randy Macho Man Savage. This concept of Machismo or Machoism is what conditioned young men to the ideal of “ a man.”

Having this distorted viewpoint of “ a man” creates an imbalance. While men represent strength, power, and resolve we also can represent sensitivity, empathy, and vulnerability. It is through vulnerability that we can find strength. Many times men find themselves dealing with issues that are unbearable. For me, that was job loss, the shelter system, divorce, and a custody battle. All this took place within a 2 year span of my life. I then found myself fighting for my freedom when an allegation was made against me by an ex-partner.

These events can be read in my book, This Ain’t My Life.

Most men lash out or “act out” their internal emotions. This in turn causes the situation to be compounded by further stress. No one knows what is going on with him but he seems to be spiraling out of control. He may even throw temper tantrums like a little child. It’s not that he is childish, it’s the fact that he has not learned how to properly address how he really feels.

Remember, men do not address their feelings.

Jason Wilson states in his book, Cry Like a Man, “Real men don’t cry—we have been deceived into suppressing our emotions to impress others; theirs simply no room for weakness.” He goes on to say, “When we vent we’re perceived as complainers. When we hurt, we’re whimps. When we’re tired, we’re being lazy.
When we fight, we’re rebels. When we’re discouraged, we’re depressed. When we hesitate, we’re double-minded, and when we cry, we’re soft.”

It is this social construct that needs to change in men throughout society. It’s okay to cry. Crying does not make you “soft.” It makes you vulnerable but it does not define who you are. Expressing your emotions through crying and other outlets are important to release toxins from the body. Who knows, this topic may be the leading cause as to why women outlive men on a national average. We hold our feelings in too long without giving it proper closure.

It is important to address your feelings. It is equally important to release your feelings into the right space. Men workout, run, lift-weights etc. This is all good for releasing endorphins but we must also learn to be in a good space with ourselves; no matter what’s going on. This can all be achieved by embracing the moments of vulnerability. When we as men can realize that being vulnerable does not define YOU, rather it sheds light on your needs improvement areas, then we will be more willing to accept the lessons to become better versions of ourselves.

An excerpt of This Ain’t My Life, states “Do not shy away from your pains. It could be exactly what you need for your life. Things get hard, believe me, I know. But I also know that it is your choice to do better. Doing better requires you to do things and experience things you never experienced before.”

Men will not overcome how they handle vulnerability overnight.

What’s important is awareness. When men become aware of the power and strength in vulnerability, then the transformation will begin to becoming a better man. It hurts that men do not dialogue enough. Also, there are too many absent father homes which prevent younger men from learning these valuable lessons from a man. Somewhere in all the smog of media, movie- characters, music, pop-culture, and status quo; we as men must redefine what it means to be vulnerable. 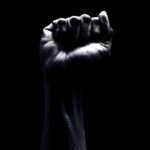 “I hope we will all see strength instead of stigma in vulnerability.”