Laura E: It was a pleasure to work with you on such a personal, touching story. This story moved me in so many ways and I’m sure it will move many readers as well. What made you tell your story?

Bilal: Thank you for you kind words. Your support and help was paramount. I decided to tell my story because I noticed that I was not going through my struggle alone. While out in the community I would hear people discuss situations that were very similar to my own. After hearing the testimonies so many times, I realized that there were many others dealing with the same issues I was facing. I didn’t feel so alone. This prompted me to tell my story. Men do not dialogue enough, in particular Black men. We go through intense suffering quietly. I felt like if I opened up and showed my vulnerable side I would be able to promote dialogue. We can all learn from each other. But the learning will only occur if we decide to talk.

Laura E: You raise a lot of good points about speaking openly. Do you think that your Muslim background had a major impact on how you chose to tell your story? And do you think that readers will be more informed about Islamic culture?

Bilal: Most definitely. I chose to be transparent about how I was raised and about how we believed. My story is not told in a way to convert anyone but I worked hard to be as informative as possible. I wanted the reader to be as immersed in the culture of Islam as I was to understand its positives and negatives. Islam has been a beacon of light in my life; something I am proud to convey. However, I also experienced extreme pain at the hands of the religious dogma. Those who were in authority chose to use the teachings to control rather than to positively influence. There are no testimonies about what happens in Muslim communities. For the most part everything is hush–hush, concealed from the public. I wanted to break the silence by telling my story. Not to condemn the faith of Al-Islam but to condemn those who used its teachings in a corrupt way. Islam is not bad, people make it bad.

Laura E: You also go on a musical journey as an artist in the Hip-Hop genre. Tell us more about how that became an additional story plot.

Bilal: Music is a major influence in my life. It was the tranquility I needed through the storm. The voice I needed in the crowd. The therapy I sought to express my deepest inner feelings. Without bringing my musical journey to the forefront would have cut a major piece out of the story that correlated to other story plots. Having music in the story balanced out how I grew as a man. Music taught me character. It was also through music that I was able to begin the process of full expression. I used music to talk openly about my thoughts, viewpoints, and concerns. Music was there for me when I needed a way to speak unapologetic. It was also through music that I was able to form many relationships. I felt having music apart of the story was very necessary.

Laura E: I couldn’t agree with you more. It was the music within the story that showed us a completely different version of Bilal—the alter ego LOGIC THE OFFICIAL. What element about you got overshadowed in the book?

Bilal: My sense of humor. There was so much drama going on in my life that I was unable to showcase how truly funny I am. I got to see how many things in my personal life overshadowed my ability to be me. A naturally funny person with an amazing sense of humor. That was put on pause to deal with mounds of problems. That’s why I had to change my life so I could be more of my true self.

Laura E: I felt that your book was gut-wrenching honest. What was the hardest part of writing the book for you?

Bilal: The hardest part for me was being vulnerable. I’m naturally a private person, so to tell my story in such a vivid way is against my nature. But I felt I needed to come clean—not just for myself—but for others, as well, who have faced similar challenges. Writing, in some ways, was therapeutic for me. I needed to be honest with myself to express my journey authentically. It was difficult for me to recount why I dropped out school, how I conceived my first child, and how I landed in the shelter system. Writing these traumatic accounts of my life took courage. But I knew intuitively that I needed to write these events for my own personal growth and in an effort to help those who will become inspired to one day tell their story.

Laura E: Thank you, Bilal, for sharing with us such a beautiful story. I learned a lot about you and your family as a result of this story. You have shared many wise words that I know will translate well with readers of all walks of life. This book is a great read. I urge all readers to indulge themselves in this well written, well told story. Just be prepared to go on one hell of a ride!!

Want To Learn Strategies, Techniques, and Life Experiences That Will Ultimately Change Your Life? 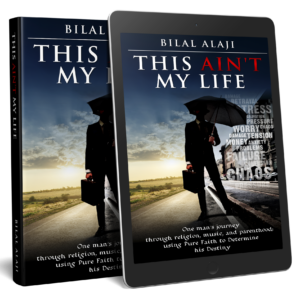